Porous materials are substances which contain uniformly-distributed small holes, or pores. As Dr. Yusuke Yamauchi explains, “When porous materials are fabricated from metals or metal oxides, which are crystalline materials, we discover physical properties which are completely different from those of the bulk. This is a new frontier for materials science.” 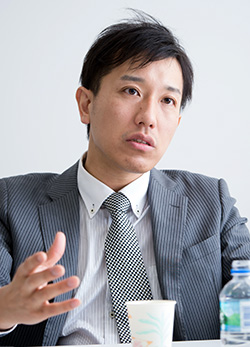 “Porous material” means a substance which contains countless small holes called “pores.” Zeolite is a well-known porous material that exists in nature. Because its surface area reaches several 100 m2 per gram, zeolite has been used in adsorbents, catalysts and similar applications. Research with the aim of creating porous structures artificially from various substances has a long history. One representative example is silica (silicon dioxide, SiO2 ). This material, which is called mesoporous silica, is already produced commercially. However, the compositions of conventional porous materials are extremely limited, and cannot conduct electricity in general.
Dr. Yusuke Yamauchi has taken on the challenge of extending the concept of porous materials and creating new materials whose compositions have not existed until now by utilizing various chemical techniques. “Originally, the fact that I’m always interested in energy problems is the backbone of my research. For that reason, I initially wanted to do research on electrochemistry, but because I lost at drawing lots when I was a student, I entered an inorganic chemistry laboratory. However, the result was fortunate, since I focused on porous materials as revolutionary substances that can be applied as energy materials.” “What should we do to realize electrical conductivity in porous materials? The answer is obvious: Metals, or metal oxides. That’s the only solution.” “For example, if graphene is produced as a porous material, its surface area increases to as much as 500 to 1000 m2 /g. Why create porous graphene? Graphene, which is an electrical conductor, can be used in large-capacity capacitor applications by increasing its surface area. This is precisely because it can be applied as an energy material.”

In porous materials, the unknown region is expanding 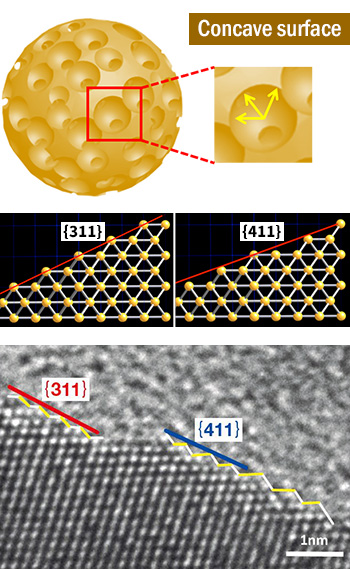 Dr. Yamauchi's research on the creation of porous materials from metals and metal oxides for the development of new energy materials is original, one-of-a-kind work. In 2013, he succeeded in fabricating mesoporous platinum nanorods with the scarce metal platinum. The surface area of this material is around 80 m2 /g. “Although conventional platinum catalysts are made from platinum nanoparticles, the thermal stability of these nanoparticles is low, so they immediately cohere into large particles, which reduces their catalytic activity. In contrast, mesoporous platinum is also thermally stable. Thus, this development realized a new platinum nanomaterial which displays sustained high catalytic activity.”
Dr. Yamauchi says that a new science is emerging as a result of the synthesis of metal and metal oxide porous materials and enhancement of the crystallinity of their skeleton. “When we create pores in a metal, physical properties which are completely different from those of the exposed surface in the ordinary bulk state appear at the surface of those pores. For example, this has the effect of increasing catalytic activity by as much as several times in comparison with the bulk. Why? Countless kinks and steps exist at the surface of the pores. When pores are made in a crystal, this happens, even if it’s undesirable. These irregular features also formed in simulations of crystal structures. This may be the reason why porous crystal materials display physical properties which are different from the bulk crystal surface (Fig. 1).” “I also did a slightly different experiment in joint work with MANA Principal Investigator Osada. Even with the same compositions, we found that a large number of crystal distortions formed in the crystal structure in comparison with the bulk when fine pores were made in the crystal material, and the Curie point also changed significantly.” “This ‘completely different physical properties’ is really interesting; it’s the same as discovering a new material.” “I don’t think simply increasing the surface area of a material by creating pores is very interesting. Something extra is absolutely necessary for science: porous materials display a nature which is completely different from the existing substance. Our slogan is ‘Make every metal and metal oxide a porous material’.”

How can metallic porous materials be created? 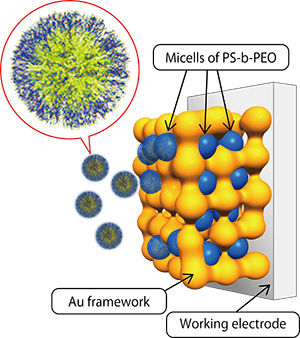 Figure 2:
Synthesis process of gold nanoporous material
A porous structure is formed by utilizing the spherical micelle (blue) as a template, which are contained by gold.

Let’s look at the fabrication method of a metallic porous material, considering the example of a gold porous material which possesses a uniform, regular nanospace. This new material has attracted considerable interest since it was announced by Dr. Yamauchi in 2015. First, micelles of PS-b-PEO block copolymers, composed of polystyrene (PS) and polyethylene oxide (PEO), are prepared in an aqueous solution. Chloroauric acid (HAuCl4), which is a compound that contains gold, is dissolved in this solution. At this point, the gold ions are thought to exist on the surface of the micelle due to interaction with the micelle surface. Because the gold ions are conjugated with the micelle, these ions also migrate to the electrode when gold is electrodeposited on a working electrode substrate by the electrolytic deposition method. This means the micelle can be made to function as a template for the structure of the porous material. When the micelle is removed by solvent extraction or some other method, a nanoporous structure corresponding to the size of the micelle can be obtained (Fig. 2). 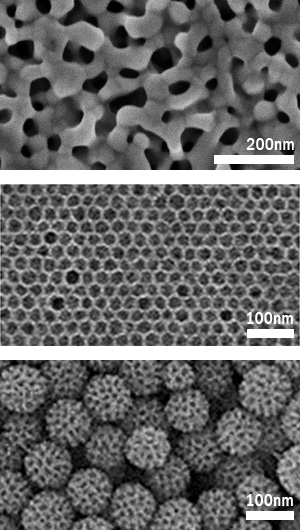 Dr. Yamauchi also discusses future development. If it is possible to obtain new porous adsorbent materials which adsorb only a designated substance by verifying the material composition), the diameter and shape of the pores and various other parameters, the range of applications will be infinitely wide. “Since these are new materials which have not existed until now, they will have a large impact on industry. For example, it is interesting that there are mesoporous materials that selectively adsorb only the odor (formaldehyde) emitted when a new house is constructed and aromatic compounds that contain carcinogens. For instance, mesoporous carbon, which has a high graphitization degree, demonstrates an aromatic compound adsorption capacity that cannot be realized with conventional active carbon or silica. This suggests that use will not be limited to electrode catalysts, but may also include a variety of other industrial applications.”
When developing concrete applications for new materials, Dr. Yamauchi always carries out the developmental work after partnering with a company. This is because, for him, what is most important to pursue from the viewpoint of science is the research theme of “creation of new materials based on porous metal and metal oxide materials.” Since the applications of porous materials are considered to be unlimited, he believes that the focus of this theme may be blurred if he spreads himself too thin.

Involved in training of young people as a young researcher

Dr. Yamauchi began working at the National Institute for Materials Science (NIMS) immediately after completing graduate school. This April, in his ninth year with NIMS, he became the youngest person to become a MANA Principal Investigator ( PI ). Thanks to training in the international environment at MANA, he says that his English conversation, which was difficult for him in his student days, has improved to the point that he can engage in even nitpicking discussions in English. He also has words of praise for MANA, which has a complete support system for researchers, beginning with its technical support team, saying that it is a suitable place to extend his talents. These days, when he has a real feeling of the weight of responsibility, he is leading his research life with an awareness that he is a bridge between young researchers and veterans. Moreover, he is also a Professor in the Waseda University-NIMS Joint Graduate Program, and is in a position to advise 10 graduate students. “For research in materials science, it is important absolutely not to waste failures and accidents. When you do something new, there is a fairly high percentage of failures. Mistakes in the conditions or changes in the composition often lead to an unexpected result. This tend to occur easily because students who are engaged in research while constantly rushing about. I help by skillfully picking that up and summarizing it in the form of research results. The unexpected result also deepens understanding.”
In addition, Dr. Yamauchi is taking up a teaching post at the University of Wollongong in Australia in May of 2016. This is an example of the new system being promoted by NIMS, which makes it possible to hold official positions at multiple research institutions. “Of course, the content of my research will center on metal and metal oxide porous materials, as it has until now. This should encourage more active exchanges between our laboratory and the laboratory in Australia. I'm looking forward to it.”

Dreams for the future

“If I’m asked about hobbies in my private life, I answer by saying that I can’t name any one thing.” He is a Ph.D. who enjoys snowboarding and scuba diving (he has a license), but he is full of curiosity and too interested in many things. When he thinks about what he really wants to do, ultimately, the answer is research. “After all, it’s really moving when I see a beautiful material with an electron microscope. Recently, friends have told me that I look ambitious,” Dr. Yamauchi says with a wry smile.
Dr. Yamauchi, who aims to pioneer a new research field with a tremendously energetic research motivation, says this: “In the first place, the division between organic chemistry and inorganic chemistry is strange. Materials chemistry handles all types of materials.” “Eventually, I’d like to skillfully incorporate organic synthesis reactions with inorganic compositions, and synthesize organic-inorganic hybrids elegantly.” When Dr. Yamauchi talks about his dream: “The more other people think that synthesis of a composition is difficult, the more I want to try it.” “Something that can be done simply isn’t interesting. Succeed in synthesis through repeated hard work, and the world will praise you!” 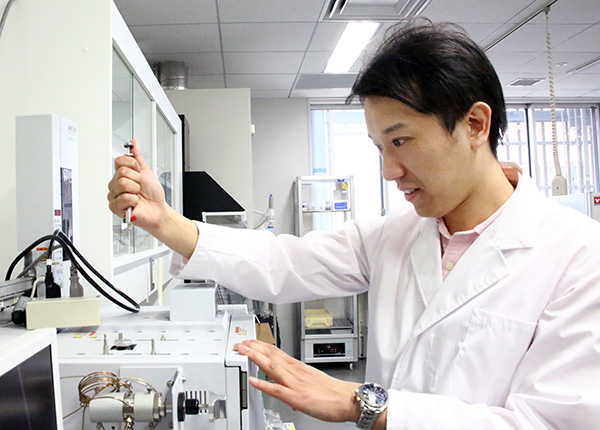