Asking The Question, “WHAT NEXT?” 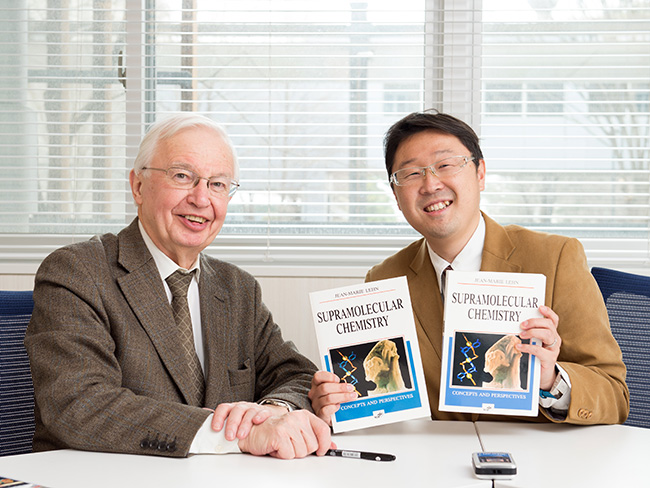 Dr. Ebara: Thank you very much for coming to MANA.

Dr. Ebara: First, I would like to ask you how the concepts of supramolecular chemistry were disseminated. Were the concepts easily accepted?

Dr. Ebara: What kind of personality or characteristics did you have when you were young? Were you curious about a multitude of things or were you focused on just one thing?

Dr. Ebara : You have published many papers. Which would you choose as the most memorable?

Prof. Lehn : For historical reasons, I would choose our paper in Tetrahedron Letters, published in French in 1969, which started our work that led to supramolecular chemistry. But much more important in terms of concepts and perspectives is my book “Supramolecular Chemistry” of 1995.

Dr. Ebara: The book is very famous in Japan actually. It has been translated into Japanese and all students in chemistry use it as a base.

Prof. Lehn : I would also like to insist on the fact that this first paper was in Tetrahedron Letters and in French. It indicates that you do not need a high impact journal and you do not need English. That is important for young people, because nowadays there is too much pressure on these issues which do not mean much to me. It is the work that makes the quality of the journal, not the journal that makes the quality of the work.

Dr. Ebara : What counts is not some high-impact journal or the language - that is a very good message to young researchers. On the other hand, what do you think of evaluation?

Prof. Lehn: If you want to hire somebody new, the best way is –-of course you have to make a gross selection first, but then-- to talk with the people. You need to invite them for an interview in order to get to know them better.

Dr. Ebara: MANA is pursuing a melting pot environment where the fusion of different fields and cultures enhances creative research. We believe that a rich international research environment makes challenging research possible. What do you consider important for helping young people develop their creativity?

Prof. Lehn: There is no national science, as science itself is fully international. I do not like it when people say that the Nobel laureate is Japanese, French or American. It is just science and it does not have to be nationalistic. To a certain extent, it is a way to give some information about the level of science on average at a national level. It is important that in order to produce high-quality work, we need to have good infrastructure, education, and an efficient administration in each country. However, we should not make science a nationalistic issue.
I usually tell young people that the scientific profession is very exciting also because it is international. You have colleagues and friends everywhere in the world.
You also mentioned an international research environment, and yes, this is very important. International but also multidisciplinary, which are two things often linked together.

Dr. Ebara: Are there any words that have influenced you? I was impressed by your words in your presentation at the 2016 MANA International Symposium, specifically “there’s even more room at the top”. It was contrasted with “there’s plenty of room at the bottom” by Richard Feynman, describing nanotechnology as an important field. Beyond nanoscience and nanotechnology, you advocate that the goal is complexity. Now we are looking for elucidating complex systems in nanoscale. That was very nice.

Prof. Lehn: That was partly tongue-in-cheek. Although I wanted to make clear that it is not so much size that counts, but complexity. As for words, there are several I find important, reason, truth, knowledge, etc…. Human beings should behave rationally and so the scientific spirit is something that influences me. 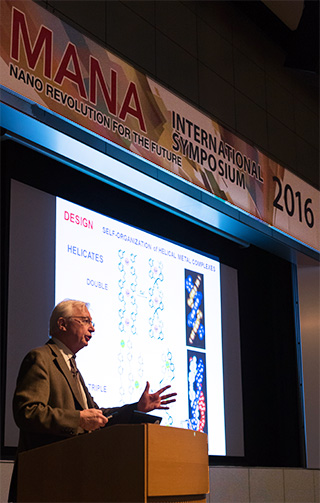 Dr. Ebara : Supramolecular chemistry has been applied to many fields now, but are there any unexpected fields where it has not been applied yet?

Prof. Lehn : Supramolecular chemistry is an important step, but chemistry does not stop there, of course. It is always important to ask the question “what next?”.
For me, what is next is adaptive chemistry where developments in chemical systems are dynamic and change their constitution as a function of different factors such as environment, physical stimulus, or a chemical entity which acts on it. It is on the way towards complex matter, with emergence of novel features as complexity increases.
Brain science is a most important and exciting field, and is just at the start considering the questions it addresses. What we are doing in brain science is very simple compared to the brain itself. Computers can do things which a brain cannot do as fast, but the brain is a much more complex machine than a computer. So, trying to simulate brain function with computers is only one aspect. Most important is to unravel how the brain works. I think one has to combine the two.
Then, we come across the question of storing information. Molecular recognition concerns the storage and processing of information in specific chemical entities. On the other hand dynamic systems open the possibility to store information in a distribution of chemical entities. If you have dynamic systems which have many components, you can generate all the combinations of these components. And if you add something to these dynamically connected combinations, the proportions will change. So, the information is not stored in a molecule or a pattern but stored in a distribution that is characteristic of the agent added. One might think of implementing this approach to encrypt information in dynamic sets, an idea that can possibly be explored.
Making biomaterials reversible and creating artificial cells are also very interesting and challenging fields.

Dr. Ebara: I am also working in the field of biomaterials and work is being undertaken on stimuli responsive polymers, not supramolecular ones, but just set polymer, like a temperature responsive polymer or pH responsive point. I am very interested in the dynamic systems because our body is always dynamic but biomaterial is mostly static. I also feel that creating artificial cells is a very challenging field.

Prof. Lehn: You are right. But polymers can be made dynamic. For instance, you can make millions of proteins out of one protein by cleaving and recombining the component aminoacids. Trying to make biomaterials reversible is really a very interesting field.

Dr. Ebara: That will be very interesting. I would like to say a very sincere thank you for taking time to speak with us. 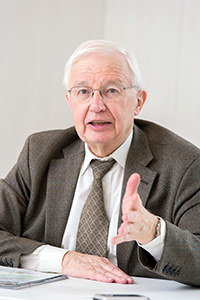 Prof. Lehn was born in 1939 in Rosheim, France, and educated at the University of Strasbourg. He obtained his Ph.D. in organic chemistr y in 1963, which was followed by a postdoctoral year at Harvard University. He returned to the University of Strasbourg, where he became a full professor in 1970. He received the Nobel Prize for Chemistry in 1987 along with Donald Cram and Charles Pedersen for their development and use of molecules with structure-specific interactions of high selectivity. 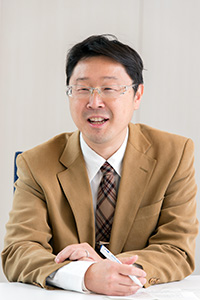 He was born in 1975 in Tokyo, and obtained his PhD in Chemical Engineering from Waseda University. His specialties are smart materials, biomaterials, and medical devices.