Breakthroughs Are What Make The Future 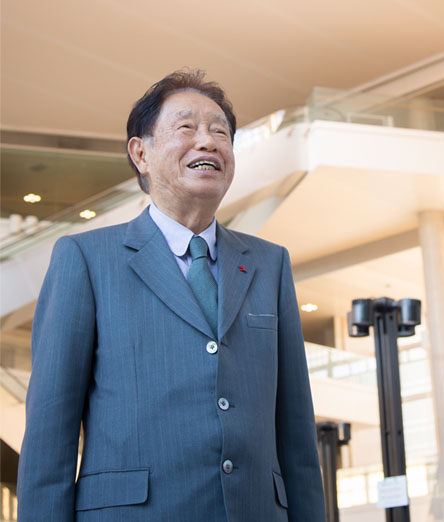 Captivated by the truth during wartime

——What was your definitive awakening to the world of science?

There is a history behind that. My first failure was the entrance exams for Kyoto Prefectural Junior High School at age 12. It was extremely discouraging, but at 13 I got into Doshisha Junior High
School. That was in 1938. It was there that I was exposed to a new world of Christian-based American culture, and for me it proved beneficial to expanding my horizons. It’s at the age of 13 that you
begin to question authority and you can pursue things yourself. The awakening of the self. Since then, I began to think that scientific research, with its value for all humankind, was the job that I was supposed to do. I feel that being at Doshisha created the foundation for me to flourish in scientific research internationally.

——That was during the Second Sino-Japanese War.

Correct. Constant war throughout my teen years. The year after the Pearl Harbor attack, I was able to enter the Third High School ( “Daisan”, or “Sanko” under the Meiji-established old system, now
part of Kyoto University). At the time, American B29 planes would come for reconnaissance, flying with exceeding stability high in the stratosphere where Japanese fighters simply couldn’t come close. I considered this a victory not for the Americans, but for science.

Again, this was during the war but at the time there were few things I could believe in. I was searching for knowledge that anyone could put faith in, knowledge that was timeless and could be deemed absolute. I believed that the knowledge of science, having expanded humanity’s limitless possibilities, and physics’ argument of universal laws linking the cosmos, were to become what was most valuable.

Here’s a memor y from the days of war. I enrolled in the Tokyo Imperial University’s Depar tment of Physics, but the air raids had gotten worse and worse. From around midnight on March 9, 1945
until the dawn of the 10th, the Tokyo Air Raids claimed 100,000 lives among its million victims in a single night. At the time, I lived in an apartment 50 meters from Tokyo University’s Red Gate, so I was able to go back home to retrieve books and such. Dawn broke on the 10th, and my Physics 1 professor Tsutomu Tanaka held his lecture at 8 A.M. as usual, and ignoring the war damage we immersed ourselves in the world of physics and desperately took notes. Professor Tanaka said nothing about the war and held class as usual. He taught us to place value on studying as top priority, no matter what happens.

It was a time I felt the true existence of Tokyo Imperial University’s academism.

The Frontier Spirit is to do what no one has done

——The lectures at the time were dealing with quantum theory, right?

A new transistor, the point-contact transistor, came out in 1947. This was an incredible breakthrough. Until then, vacuum tubes had been used for signal amplification. I had also done research on vacuum tubes. An impor tant point here is that had the transistor not come about, my vacuum tube research would have continued. In a stable society, people tend to think of the future as a straight continuation of the present, but breakthroughs are not the same as constantly-evolving research results. Breakthroughs lead to innovations that create the future.

Inspired by the creation of the transistor, I started research on the physics of the semiconductor, completely new in the industry at the time. Semiconductors, at the time an unexplored frontier, operated with germanium and silicon. Research in unexplored territory, with plent y of topics to study, brought great numbers of results. By researching these frontier fields, we witnessed the implementation of breakthroughs. The Esaki tunnel diode was work in such unexplored territory.

——What troubles did you face with the Esaki diode?

The challenge of the limits of thinness. I made the electron barriers of p-n junctions as thin as possible, a width of 10 nanometers. It was research from scratch. I made lab equipment by myself through trial and error. Finally in 1957, I was able to survey quantum-mechanical tunneling of electric current. Then at the same time, there was also the surprise of negative resistance. This gave diodes groundbreaking characteristics, an unexpected discovery. My hardships up until then were rewarded. Surprises like this are the true essence of science.

The following year, in June 1958, the Esaki diode at tracted attention at the International Conference on Solid State Physics in Electronics and Telecommunications in Brussels. William Shockley, winner of the 1956 Nobel Prize in physics, praised my research results on the tunnel effect, saying “Leo Esaki will show you the most beautiful research achievement on the tunnel ef fect we had ever seen.” Thanks to him, the lecture was packed to capacity. I was 33 at the time.

——After that, research on the Esaki diode in the U.S. really began to pick up steam.

Yes. I was called upon, invited to give lectures in many places across the states. When I went to Bell Laboratories for a lecture, there was a bust of A lexander G raham Bell accompanied by
his words. I still remember them now. “Leave the beaten track occasionally and dive into the woods. You will be cer tain to find something you have never seen before.” Moved by this, I thought,
“Alright then, I’ll leave the beaten track of Japan, dive into the woods of America, and test my strength.” The frontier spirit.

——Then you entered the Thomas J. Watson Research Center at IBM.

In 1960, their central research facilities were still midway through construction. There, lab chief Lloyd Hunter told me to freely research whatever I thought to be of value. There are two ways of going about research - you can tackle a challenge on your own, taking a“do it my way” approach, or you can go after a hot topic many are concerned with, surrounded by competition. The lat ter is easier to receive funding for, while the former has the risk of receiving no appreciation until you have results to show. However, if you’re lucky to have the opportunity, a breakthrough may be possible. And Dr. Hunter understood that. At the time, I was working with manmade superlattices, which of course falls into the former category of research. Thanks to that, molecular beam epi tax y research progressed greatly, and we were able to use it in creating the structure for semiconductor superlattices. With these results, I was awarded the 1998 Japan Prize. But long before that, in 1973, I was awarded the Nobel prize for my discovery of the quantum-mechanial tunnel effect. I was 48 at the time.

You play the lead in the human drama

——What expectations do you have of nanoscience from here on?

What’s interesting about science is that you can’t clearly predict the future of science. The future of technology we can, and why is that? It’s because technology is the practical use of current science.

Fields close to the practical application of science, such as the biomedical field, will make great advancements, and gravitational wave obser vat ion using K AGR A is one I have high hopes for. Nanoscience will contribute to understanding of life through DNA. Generally speaking, interdisciplinary nanoscience is a field that we can expect groundbreaking results from in the frontier of new research.

I believe scientific research is the most valuable work that humans can do. Science precisely internalizes progress, and limitlessly magnifies the capacities of humans. Literature, music, the arts, and sports change shape along with the times, but will never progress like science will.

When I graduated from Tokyo Imperial University, I developed my own life script. I constructed a grand life plan of attempting to do things no one could do, to apply new ideas in quantum mechanics
and build quantum devices. Human life is a drama where you perform the lead role, and that script is put to the test. If you can create a scenario where you harness the best of your abilities, then all you have to do is wait for the opportunity. Pasteur said, “In the fields of observation chance favors only the prepared mind.” 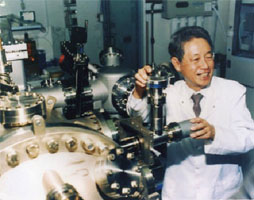 Leo Esaki
President of Yokohama University of Pharmacy, Chairman of the Science and Technology Promotion Foundation of Ibaraki.

After graduating from the Department of Physics, Faculty of Science at Tokyo Imperial University (now The University of Tokyo) in 1947, entered Kobe Industries Corporation. Transferred to Tokyo Tsushin Kogyo (now Sony Corporation) in 1956, and obtained his Doctor of Sciences in 1959 (The University of Tokyo). Entered T.J. Watson Research Center at IBM in the United States in 1960. Awarded the Nobel Prize in Physics in 1973. Became member of the Japan Academy in 1975, foreign associate member of the National Academy of Sciences, US in 1976. President of University of Tsukuba from 1992 to 1998. Awarded the Japan Prize in 1998, President of Shibaura Institute of Technology from 2000 to 2005, President of Yokohama University of Pharmacy from 2006, concurrently Chairman of the Science and Technology Promotion Foundation of Ibaraki.