The coming era of limited energy will be very difficult for everyone on Earth, and there have been high expectations for thermoelectric materials, which convert waste heat directly to useful electricity. We interviewed Dr. Takao Mori, who has been engaged in research to elucidate the mechanisms for high performance in the materials with Nanoarchitechtonics, asking how we can overcome the issue with science.

The energy problem and thermoelectric materials 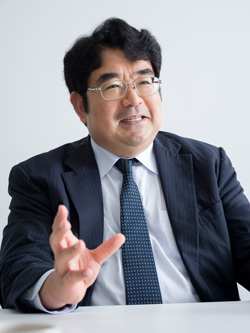 In the flow of energy supply, the energy loss in the use of primary energy such as petroleum, coal and natural gas is extremely large. Effectively utilized energy accounts for no more than about one-third of the original energy. Virtually all of the remaining two-thirds is discarded as waste heat.
For this reason, large expectations have been placed on thermoelectric materials in recent years. Thermoelectric materials are solid materials which have the property of mutually converting thermal energy and electric energy. The phenomenon of direct conversion of a temperature difference in an object to electric voltage was discovered in 1821 by the physicist Thomas Seebeck and is called the Seebeck effect. However, even today, in the 21st century, technologies for direct conversion of waste heat to electricity utilizing the Seebeck effect have still not reached practical application. The main reason for this is the fact that no thermoelectric material with adequate performance has yet been developed. To solve this problem, Dr. Takao Mori of MANA is engaged in research aimed at achieving high performance in thermoelectric materials from the standpoint of nanoarchitectonics. “We’ve taken on the challenge of solving a global-scale problem, namely, the energy problem, by studying materials from a truly small, ‘nano’ viewpoint.”
To begin with, Dr. Mori explains the two large hurdles to high performance in thermoelectric materials. First, the index that represents the performance of thermoelectric materials is expressed by Z = S2 σ / κ, where Z is the figure of merit, S is the Seebeck coefficient, σ is electrical conductivity and κ is thermal conductivity. In order to increase the figure of merit Z, it is necessary to increase the Seebeck coefficient S and electrical conductivity σ simultaneously. However, this is not easy because a tradeoff relationship generally exists between S and σ. “In semiconductors, σ increases if the carrier density is increased, but S becomes smaller. In insulators, S is extremely large, but σ is small, which means a current does not flow.”
As the second hurdle, a material with good electrical and poor thermal conductivity is required. Since the voltage generated in a thermoelectric material corresponds to the temperature difference, transmission of heat in the material should be prevented as much as possible. In other words, in order to generate good voltage, the temperature difference needs to be maintained. This is also no simple matter because “conduction of electricity” and “non-transfer of heat” are generally mutually-contradictory properties.
As an additional problem, the thermoelectric materials that were considered promising in the past used elements such as bismuth (Bi), tellurium (Te) or lead (Pb) which are scarce and expensive and/or toxic. To realize wide practical application of thermoelectric materials in society in the future, Dr. Mori believes that it is important to develop thermoelectric materials using raw materials which are abundant in nature and can be obtained at low cost. “Considering global conditions, we should avoid a situation where we must inevitably depend on rare metals, particularly in resource-poor countries like Japan.”

In his current research, Dr. Mori is developing thermoelectric materials mainly from two directions. The first involves precise control of the nanostructure in thermoelectric materials by utilizing nanoarchitectonics. “The length of the mean free paths of the phonons and electrons that carry thermal energy are generally different. The approach of creating a nanostructure that can scatter phonons more selectively by utilizing these different mean free paths is widely used around the world. That is, heat is effectively scattered in the material, but due to the short mean free path of electrons, the electrons are hardly affected and can pass through the material. The key point is what kind of nanostructure we should use.”
Conventionally, mechanical methods, for example, using a ball mill, were frequently used to introduce a nanostructure into the material. However, Dr. Mori and coworkers have succeeded in fabricating a new nanosheet of a thermoelectric material (Fig. 1). “Nanosheets of a copper tellurium compound (CuTe) are delaminated by a wet bottom-up process using a three-stage chemical reaction. In a sample using this nanosheet, heat could be scattered with comparatively little loss of electricity, and the thermoelectric effect was improved by 30% in comparison with conventional materials. This in itself is a significant improvement in performance. Actually, however, this material still does not have the ideal structure from the viewpoint of nanoarchitectonics. Thus, a dramatic improvement in performance is expected if these can be arranged more skillfully to produce a bulk material with a high-order layered structure.”

Fig. 1a: Possibility of nanosheet of thermoelectric material: The performance of the nanosheet thermoelectric material produced by the wet bottom-up process created by Dr. Mori and coworkers can be improved by 30%, even in samples not optimized by spark plasma sintering (SPS) at all. However, in the future, dramatic improvement of performance is expected if it is possible to arrange the sheets in a high-order structure designed by nanoarchitectonics. 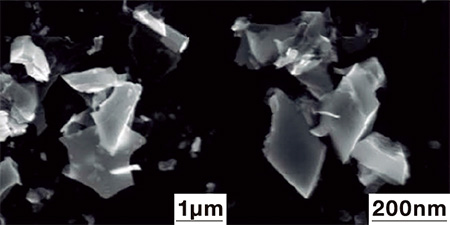 The champion thermoelectric material in the mid- to high-temperature range, realized with a rare earth-free composition design

As potential champion thermoelectric materials in the mid- to high-temperature range, many researchers around the world are studying materials with caged crystal structures. High performance can be achieved in this type of thermoelectric material because phonons are effectively scattered by utilizing the phenomenon called “rattling,” in which atoms doped in the cage structure are vibrating (“rattling”) inside the cage. However, practical application is difficult because rare earth elements, etc. are frequently used as the dopant, which incurs supply risks on the material side, and oxidation resistance is also poor.
To avoid these problems, Dr. Mori's group discovered a method in which high performance is obtained from the caged crystal structure without depending on rattling of rare earth atoms. He developed a thermoelectric material with the world’s highest performance, comparable to the best materials using rare earths, by forming an appropriate porous structure in the material as a new nanostructure (Fig. 2). “In spite of the rare earth-free composition design, conversion efficiency is equivalent to 15% or more. I think this is an important advance toward the long-desired goal of practical application.”
This research achievement received the nano tech Grand Award 2016: Research Project Award (Green Nanotechnology Division). 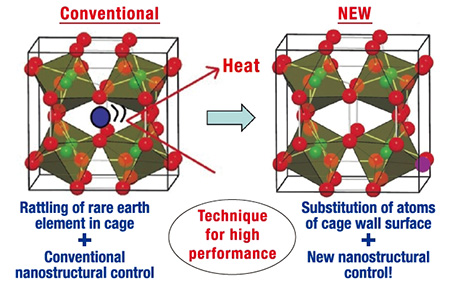 Fig. 2b: Synthesis of new high performance thermoelectric material. Atoms in the cage wall structure are substituted, and pores are formed as a new nanostructure in the material by vaporization of an impurity phase which is intentionally created based on the phase diagram of the material (diagram showing the relationship between the phases of a substance and its thermodynamic state). Due to the existence of appropriate pores, the material conducts electricity but heat is easily shielded. 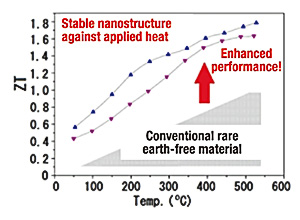 In 2015, the research topic “Development of novel magnetic semiconductor thermoelectric materials and thermoelectric generation devices,” under the leadership of Dr. Mori, was selected as a CREST Project of the Japan Science and Technology Agency (JST), and a team type research project was launched with the cooperation of NIMS and Tsukuba University, which are research organizations in the Tsukuba area. The ultimate goal is to create power generation devices which will contribute to practical application by theoretically elucidating and developing the mechanism of high thermoelectric performance by magnetism. This approach also includes the use of advanced nanostructural control.
Thermoelectric materials have attracted keen interest also from industry. Dr. Mori says that the NIMS Open Innovation Center, in which he himself is involved, is functioning extremely well in this regard. “We are enjoying active participation by companies, and we now have the best conceivable environment for research and development. Although there is still not a large market for thermoelectric power generation, our researchers are taking on issues that are close to basic research together with companies. Thanks to this interest from the corporate side, we’ve learned a lot about the issues and needs from the viewpoint of application.”
How to overcome the cost issue is also a problem. “For example, solar power wasn’t profitable at first, and subsidies from the government were necessary for popularization of that technology. However, solar power is now an extremely large industry. It’s necessary to have a spirit of challenge, which doesn’t give up because the hurdles are high, but asks how we can overcome those hurdles. Both researchers and companies have to have that spirit.”

Control of phonons
— a dream of human science

When we asked Dr. Mori who has had the greatest influence on him in his life to date, he replied, “It’s still my father.” He went on to say, “Because my father was a particle physicist, I was always interested in science since childhood. My father was a particle physicist, and I do research in solid-state physics. Although our fields are different, I think he had a really large influence on me, in something that can be communicated, even without words, about the proper stance of a researcher.”
Beyond development of thermoelectric materials, Dr. Mori is looking ahead to thermal control as a big research theme. During the 20th century, it became possible to control many of the key elements that make up the physical world, such as electrons, spins, and photons, by the power of science, but precise control of phonons and heat still has not been realized. “In the 21st century, I think that control of heat at a high level will be the greatest challenge for humankind. Thermoelectric materials are also included in this big theme. This is definitely not an impossible goal. Because of the accumulation of our understanding of thermal properties, phonon control and other knowledge to date, I believe that this can be realized. Of course it will be difficult, but I definitely want to follow through and accomplish this.” “The nature of phonons is very different from that of electrons. I think this a good chance for today’s young researchers because they can take on this important issue based on the accumulation of knowledge to date.”
Dr. Mori, who always has a gentle smile, is also the father of one boy who is currently in elementary school. “Without realizing it, children learn by watching their parents. Since I was like that too, as a father, I have to show my son the hard work of being a scientist.” 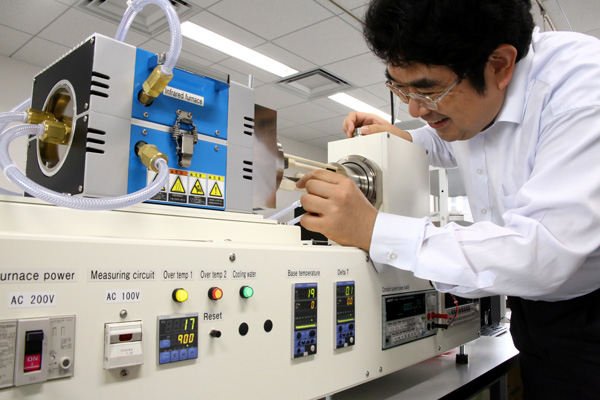 He is Laboratory Director of the Materials for Thermal Energy Conversion Open Laboratory in the NIMS Open Innovation Center, External Collaboration (EC) Division, and Visiting Professor at Hiroshima University. He is also Chief Researcher of the Thermal Management and Thermoelectric Materials Group, “Materials Research by Information Integration” Initiative, NIMS.