“My background is surface science and my first interest in sensors was triggered in 2007 during my stay as a visiting scientist at the University of Basel,” says Genki Yoshikawa, Group Leader at the International Center for Materials Nanoarchitectonics (WPI-MANA), at the National Institute of Materials Science (NIMS). “I worked in Dr. Christoph Gerber’s group. I learned a lot from him and his colleagues about cantilever array sensors. Then, I also had collaboration with Dr. Heinrich Rohrer and with the MEMS expert members from the École polytechnique fédérale de Lausanne (EPFL), Lausanne, Switzerland, eventually leading to the invention of the Membrane-type Surface stress Sensor (MSS). We published the technical side of the story in 2011 [1]. While there are lots of potential applications for MSS, I decided to focus on smell, because it is the last ‘untapped sensor’ with no commercially available devices in our daily life for more than 30 years at least.”

The MSS was developed in collaboration with the late Dr. Heinrich Rohrer, and researchers at EPFL, and made public in 2011. The MSS is a compact, ultra-sensitive piezoresistive device fabricated using silicon microfabrication technology with a receptor layer enabling detection of a wide range of molecules including odorous gas molecules, and biomolecules such as DNA and proteins.

Conventional piezoresistive sensors are widely used as strain gauges to measure acceleration and pressure. In its simplest form, the operation of a piezoresistive sensor is based on the physical fact that applying mechanical strain induces changes in the electrical resistivity of silicon or metals and conductors used for fabricating the devices, due to mechanical deformation of the materials. However, for sensing applications, conventional cantilever-type sensors made of silicon requires structural optimization because the uniform stress induced by the adsorption of molecules cannot be efficiently detected.

“The MSS is a unique nanomechanical sensor,” explains Yoshikawa. “We totally redesigned the structure of conventional cantilever-type sensors. Typical MSS consists of a 300 micrometer diameter adsorbate membrane that is suspended by four piezoresistive ‘sensing beams’. So, the MSS is not a conventional cantilever-based sensor. It has a unique structure, exhibiting unsurpassed performance.”

Notably, the limit of detection of the MSS is approximately 0.1 mN/m, a figure of merit that is compatible with laser read-out cantilever sensors and more than 100 times higher than conventional piezoresistive cantilever sensors. Details about the fabrication and wide-ranging applications have been extensively reported by Yoshikawa and colleagues [1–9]. 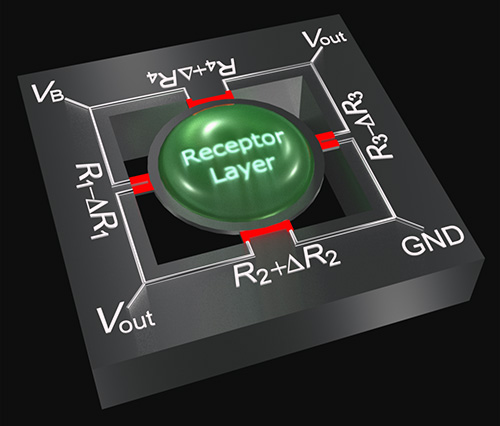 Illustration of the main parts of the MSS. The schematic shows the adsorbate membrane suspended by four sensing beams etched in silicon, and the Wheatstone bridge for the signal read-out.

The MSS Alliance was launched on 25 September 2015 to accelerate the process of taking the MSS technology from the lab to real-world applications. The members of the industry-government-academia alliance include NIMS, Kyocera, Osaka University, NEC, Sumitomo Seika, and NanoWorld. From April 2017, Asahi Kasei also joined the alliance.

“The members of the MSS alliance reflect the multidisciplinary nature of the expertise required for the proliferation of this technology,” says Yoshikawa. “We have partners specializing in sensor chips, materials science, standard gases, system integration, analysis of big data with machine learning, and ICT and cloud networks.”

Notably, in November 2017, the MSS alliance launched the new framework “MSS Forum” to encourage interested companies and organizations from the public to perform demonstration experiments using the technologies developed by the MSS alliance.

“We are trying to create a de facto standard for olfactory sensing based on the MSS technology,” says Yoshikawa. “The MSS will cover various applications ranging from health-care by exhaled breath, tests to assessing the quality of fruits and food to environment and security applications. My dream is that this concept will enhance people’s lives on a global scale”.