A team at WPI-MANA has developed the first-ever artificial retinal device that increases the edge contrast between lighter and darker areas of an image, using ionic migration and interaction within solid. The device has the potential for use in developing compact, energy-efficient visual sensing and image-processing hardware systems capable of processing analog signals. 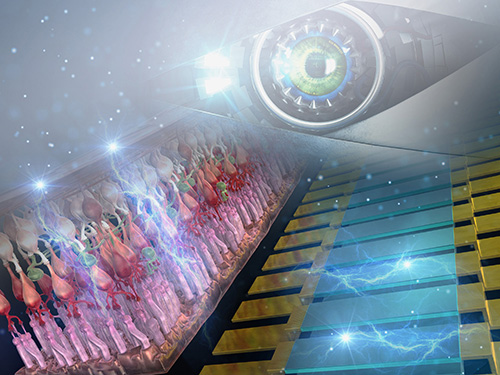 Recently artificial intelligence (AI) system developers have shown much interest in research on various sensors and analog information-processing systems inspired by the human senses. Most AI systems require sophisticated software and complex circuit configurations, including custom-designed processing modules. The problem with these systems is that they are large and consume much power.

The team built a multiple ionic device system, each of which had a lithium cobalt oxide channel arranged on a common lithium phosphorus oxynitride electrolyte. Because of the migration of Li-ions between the channels through the electrolyte, the devices were highly interactive, similar to human retinal neurons such as photoreceptors, and horizontal and bipolar cells. Input voltage pulses caused ions within the electrolyte to migrate across the channels, which changed the output channel current.

The human eye produces various optical illusions associated with tilt angle, size, color and movement, in addition to darkness/lightness, and this process is believed to play a crucial role in the visual identification of different objects. The artificial retinal device the team created could be used to reproduce these types of optical illusions. They hope to develop visual sensing systems capable of performing human retinal functions by integrating their device with other components, including photoreceptor circuits.