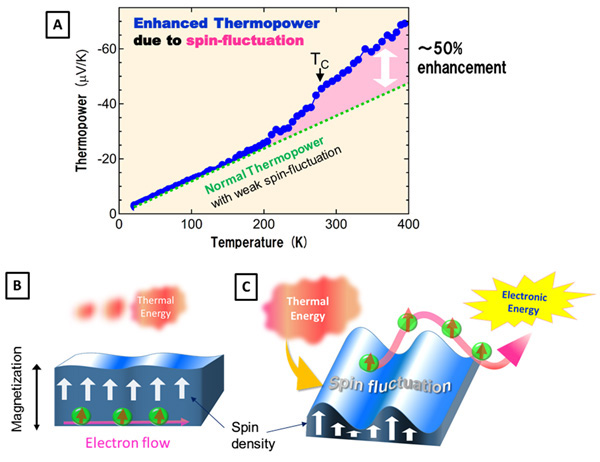 Figure:
(A) Thermopower as a function of temperature of Fe2.2V0.8Al0.6Si0.4. The material orders ferromagnetically at TC = 285 K. Above TC, thermopower shows a remarkable enhancement up to 50% from the normal-metal one.
(B) Schematic illustration of a strong ferromagnetic metal, where local spin density is uniform and the net magnetization is stable. Then, thermal energy does not affect to electronic properties.
(C) In case of weak ferromagne near the magnetic instability, thermal energy is well absorbed to metals to induce spin fluctuation (thermal fluctuation of local spin density), and is effectively transferred to electronic energy. As a result, thermopower is enhanced by spin fluctuation in weak ferromagnets.

Rather than letting ‘waste’ heat dissipate, it is possible to use it and convert it into electrical energy. Such thermoelectric conversion is an important technology, especially in today’s context of alternative energy sources. Yet, achieving high recovery efficiency is difficult. Now, Tsujii Naohito at the International Center for Materials Nanoarchitectonics, National Institute for Materials Science, Tsukuba, Japan, and colleagues have discovered that certain compounds belonging to the so-called class of weak itinerant ferromagnets display enhanced thermoelectric power under certain conditions. The finding, which is explained by a physical effect known as spin fluctuations, is likely an important step towards the development of practical thermoelectric generation systems.
The researchers investigated two iron-containing compounds (Fe2V0.9Cr0.1Al0.9Si0.1 and Fe2.2V0.8Al0.6Si0.4). These materials are weak ferromagnets. To quantify the thermoelectric power of the two compounds, Naohito and colleagues measured their Seebeck coefficients over a wide temperature range. (The Seebeck coefficient is defined as the ratio between the voltage generated by a temperature difference in a material and the temperature difference itself.)
The Seebeck coefficients displayed an unexpected enhancement over a broad temperature range with a peak around the materials’ Curie temperature (above which they are no longer permanent magnets) and extending to above room temperature. The latter is important for potential practical application of the compounds’ enhanced thermoelectric power.
The scientists noticed that upon applying a magnetic field, the enhancement is suppressed, which is a signature of so-called spin fluctuations. This phenomenon is understood as follows. In weak ferromagnets, spin polarization is easily damped by absorbing heat energy. Then, spin fluctuation (thermal fluctuation in local spin density) is induced in exchange. This helps itinerant electrons gain extra energy, which causes the enhancement in thermopower. Upon applying magnetic field, on the other hand, the net magnetization becomes stabilized, but the spin fluctuation is suppressed. Thus the enhancement in thermopower vanished in magnetic field.
The researchers estimated that for compounds like the ones they investigated, a Seebeck coefficient enhancement of about 50% is feasible, which would result in a very high thermoelectric conversion power factor.
The scientists conclude that their findings “demonstrate that spin fluctuations in weak itinerant ferromagnets have an excellent potential to boost thermoelectric PF [power factors] up to practically useful levels around the room temperature range” and that the result “ is quite unique and will add a new aspect of correlating magnetism to the power generation technologies.”