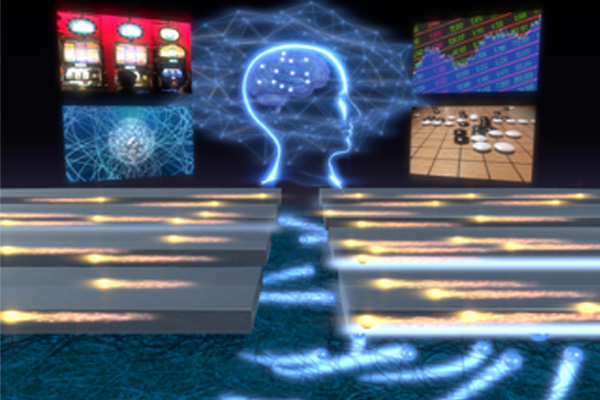 Decision-making processes require the examination of complex data in order to effectively adapt to dynamic changes in the environment and make decisions about the most appropriate way to behave. Emulating these processes with computers requires enormous resources, so new avenues need to be explored.
Now, writing in Science Advances, Takashi Tsuchiya, Tohru Tsuruoka, Song-Ju Kim (currently at Keio Univ.), Kazuya Terabe and Masakazu Aono at the World Premier International Center for Materials Nanoarchitectonics (WPI-MANA), National Institute for Materials Science (NIMS), Tsukuba, Japan propose to use ionic devices to perform decision-making operations. They apply their devices, named ionic decision-makers, to the solution of multiarmed bandit problems (MBPs); mathematical problems in which a gambler given a choice of slot machines must select the appropriate machines to play so as to maximize the total reward in a series of trials. MBPs have been applied to various practical technologies related to artificial intelligence. The scenario investigated by the authors is that of a user of busy communication channels who needs to select a channel to transmit information with maximum efficiency.
A two-electrode electrochemical cell, with Nafion proton conducting polymer electrolyte and Pt electrodes, is used to solve MBPs with two channels (A and B), with transmission probabilities PA and PB, of which the user has no a priori knowledge. The setup comprises the cell, a device controlling the flow of electric current through it, and a random number generator that determines the transmission of data packets. The electrical potential of each of the two electrodes, A and B, is used to evaluate which channel is the best to select, and it increases or decreases on the basis of whether or not the channel is open for transmission.
Ions in the electrolyte are initially randomly distributed, but there is still a small voltage across the device. This voltage is measured; if it is positive (negative), a random number is generated to emulate the selection of channel A (B), that is, to determine whether a packet is transmitted or not. In accordance with the result, a pulse current is then applied in the corresponding polarity, varying the concentration of ions and/or molecules in the vicinity of the electrodes. The rate of correct selection increases with the number of selections, because the variation in the concentration near the electrodes makes it a more or less likely choice in subsequent selections. To verify the adaptability of the system to environmental changes, PA and PB was inverted after some selections; the rate of correct selections initially dropped, but the decision maker quickly adapted.
A more complex problem is that of two network users trying to select an available channel. If they select the same channel the probability of it being open is split between them, so that the number of transmitted packets decreases substantially for both. This is an important practical problem for communication network systems with limited channels and many users. The authors present an extended decision maker, with two electrochemical cells and three channels, which is particularly effective at solving such problem and can maximize the number of packets for all users.
The authors comment, “The ionic decision-maker creates a new research field of ‘materials decision-making’ in which the intrinsic properties of materials are used to make decisions, not only for large-scale computations of human behavior but also for developing autonomous intelligent chips for mobile applications.”