Origins of Macroscopic Friction Linked to Energy Landscape on the Nanoscale 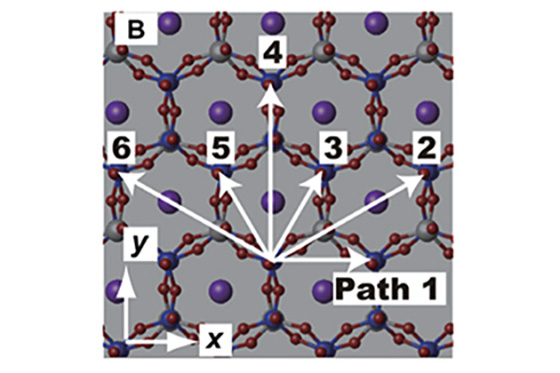 Figure: Structure of muscovite mica and considered sliding directions.
Everybody is familiar with friction — the phenomenon plays an important role in our daily lives. Yet, although phenomenological laws exist that describe friction on the macroscale, a detailed understanding of the processes involved on the microscale is lacking. Now, Hiroshi Sakuma and Shigeru Suehara (the International Center for Materials Nanoarchitectonics, National Institute for Materials Science, Tsukuba, Japan) with their colleagues have studied friction forces in mica, both theoretically and experimentally, and have found the origin of molecular friction in this system.
Mica, a naturally laminated aluminosilicate material, should be one of the most common minerals at the earth’s surface. It typically consists of AlO6 ‘octahedral’ sheets sandwiched between ‘tetrahedral’ sheets of SiO4 and AlO4. (Octahedral and tetrahedral refer to the arrangements of the aluminium, oxygen and silicon atoms within the layers.) In between layers are potassium atoms. They focused on difference between sliding paths (directions along which a force was exerted) parallel to the main crystallographic cleavage planes.
The scientists considered the energy change when applying a force to the top layer — in other words, when trying to pull away the layer — in each of different six directions as shown in Figure. Using a numerical technique called density functional theory, they calculated the increase (or decrease) in energy as a function of the displacement vector by which the plane was shifted. Combining the results for all six pulling paths resulted in a potential energy surface (PES); the height of the surface corresponds to the energy it takes to displace the top layer away from its origin to the new position.
The research team then performed experiments, to see whether the observed trends are indeed observed. They applied shear stresses in mica (parallel displacements within the material and sliding along path 4) up to forces corresponding to a pressure of 60 megapascal. Their main finding was that these stresses exhibited larger than those of predicted stresses by the numerical techniques. Ultimately, this means that molecular-scale friction does not simply scale up to the macroscopic level.
Careful observation of the recovered mica samples revealed that the presence of wear particles on the sliding plane. This wear particles would randomize the crystallographic sliding direction by their coincidental rotation. This means that the friction occurred along various crystallographic sliding directions. The shear stress predicted by in-plane averaging of the numerical techniques was quantitatively consistent with the experimental results.
The results of Sakuma, Suehara, and their colleagues help to better understand the nature of friction in layered materials, and to make comparisons between them. Quoting the scientists: “... the difference of PES among sheet-structure minerals can be a clue for understanding the difference of friction coefficients that are critical for the strength of natural faults.”