Evidence of A New Type of Quantum Effect 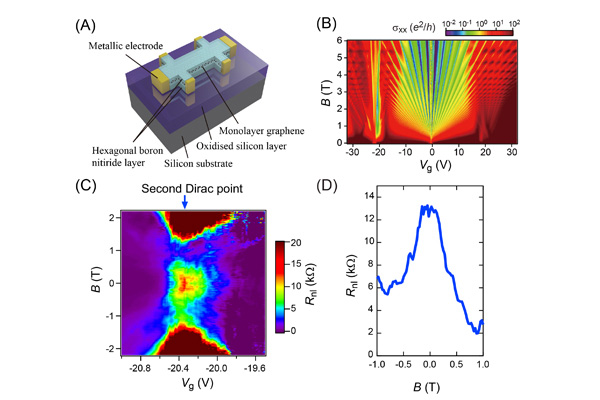 The quantum Hall effect (QHE) is a phenomenon that can occur in a two-dimensional electron gas — a system in which electrons can move in a plane but not perpendicularly to it. Such a system is typically realized in a heterostructure of thinly stacked layers of different semiconductors. The QHE is usually observed at low temperatures and high magnetic fields; it manifests itself through the quantization of values of the electronic conductance (the inverse of resistance) — the values are integer or particular fractional multiples of a fundamental conductance quantum.
Recently, variants of the QHE have been discovered, such as the quantum spin Hall and the anomalous quantum Hall effect. Now, Satoshi Moriyama at WPI-MANA, NIMS, Tsukuba, Japan, and colleagues have observed yet another relative of the QHE: the quantum valley Hall effect.
The notion of ‘valleys’ refers to electronic states having the same energy but a different crystal momentum; the states are said to lie in different valleys. A new type of electronics called ‘valleytronics’, based on the valley degree of freedom, is being researched since some years.
Moriyama and colleagues demonstrated the quantum valley Hall effect in a special heterostructure capable of hosting a two-dimensional electron gas: a sheet of graphene sandwiched between hexagonal boron nitride (h-BN) layers. Graphene is a one-atom thin layer of carbon atoms forming a honeycomb pattern. h-BN is similar; it is also a monolayer with a honeycomb structure, but it has a slightly different lattice parameter. Due to the mismatch in lattice size, the periodicity of the combined system is much larger — overlaying the two lattices results in a moiré pattern.
Importantly, the investigated electronic regime in the superlattice was ballistic: the electrons’ mean free path (the mean distance travelled between scattering events) was estimated to be 1 to 2 micrometer, which was comparable to the size of the sample.
The researchers varied the magnetic field while measuring resistances, and at a small interval centered around zero field they observed a non-vanishing resistance — a signature of the quantum valley Hall state.
An important fundamental finding on its own, Moriyama and colleagues note that it also may lead to potential applications: “[such] unconventional magnetism should have the potential for engineering the energy-band structure [of devices] even with a weak magnetic field as well as for spintronics applications.”