Innovative Transistors Based on Magnetically Induced Movement of Ions

Just as magnets attract iron particles in sandpits, permanent magnetics only attract one type of ion in an electrochemical solution, constituting the basis of magnetically controlled electrochemical transistors. 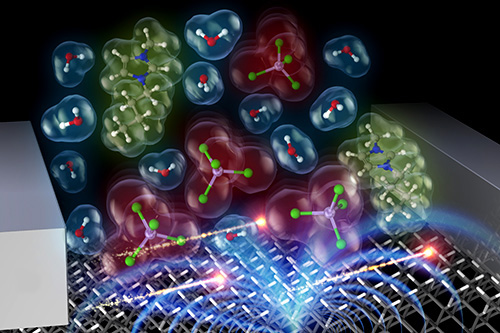 Electrochemical devices find application in many technologies, including batteries, capacitors, sensors, and transistors. For such electrochemical devices to operate, they need an electric field that causes ionic transport and electrochemical processes. This simple but strict rule has long hindered innovation in electrochemistry and related technologies, however, WPI-MANA researchers recently challenged the rule with their development of ‘magnetic control of electrochemical devices’.
WPI-MANA researchers Takashi Tsuchiya and Kazuya Terabe and their co-workers used a small magnet, instead of electrical equipment, to drive ions. The transport of paramagnetic FeCl4 ions in a liquid electrolyte (including [Bmim]FeCl4) was magnetically controlled to operate a typical electrochemical device; an Electric Double Layer Transistor (EDLT), a type of transistor that uses an EDL at a semiconductor/electrolyte interface to tune the electronic carrier density of the semiconductor. An electrical conductance of a two-dimensional hole gas (several nanometers thick) at a diamond (100) single crystal/electrolyte interface was successfully switched by a magnetic field, although the switching ratio was smaller than in conventional EDLTs that are controlled by an electric field.
The magnetic control of ions adds a new dimension to the ‘nanoelectronics achieved by ions’ paradigm, invented at WPI-MANA as the atomic switch*, and such control has a huge impact, even on other electrochemical devices. It has the potential to realize innovative applications that have not been possible using conventional approaches. Furthermore, this discovery stimulates the development of high performance magnetic electrolytes to support such innovation.

In electrochemistry, a branch of chemistry that has already been studied intensively, the interdisciplinary field with magnetism is one of the few great frontiers remaining. Researchers will be undeniably attracted to it, like iron sand is to a magnet.