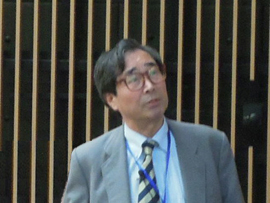 On May 7, 2012, MANA Second-term Kickoff Meeting was held at Auditorium of the new WPI - MANA Building.

Then Dr. Masakazu Aono, MANA Director General, gave an Introduction talk. He presented the history of the MANA research strategy in the past 5 years and emphasized the importance to promote research based on the concept of “materials nanoarchitectonics”. Then he explained the outline of MANA’s activities including the three goals of MANA for the next 5 years, the realization of a material-based brain-type computational network, a room-temperature superconductor and an artificial photosynthesis. Finally he presented MANA’s vision and missions. 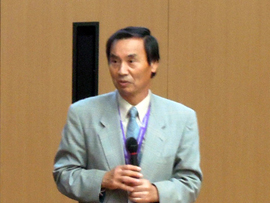 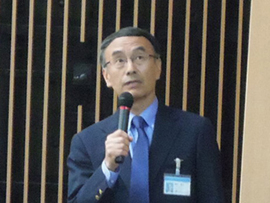 Takahiro Fujita, MANA Administrative Director, explained about the new WPI-MANA Building, which was constructed based on two key concepts: “The ground Melting Pot”, developed from the previous “Melting Pot”, and “Towards Zero Energy Laboratory” with energy-efficient technologies that significantly reduce the energy demand and carbon dioxide emissions.

Then the award ceremony for the Scientific Art Pictures Contest was held. In November 2011, Dr. Masakazu Aono, MANA Director General started a call for scientific art pictures to be used for wall decoration at the MANA Building and the new WPI - MANA Building. From 86 submissions, 3 pieces were selected to receive a prize consisting of a certificate and a commemorative medal from Dr. Masakazu Aono.

(From left to right) “Efflorescence”, “Ag nanowires assembled on
surface of carbon sphere”, and Charge freezing toward Mott
transition”.