Atomic layer materials, including graphene, have been actively studied in recent years. In particular, much attention has been drawn to discoveries of superconducting atomic layer materials with a high transition temperature. These materials are superior to bulk materials in that their superconducting properties can be controlled through carrier doping of their surfaces/interfaces. However, it had been difficult to understand the mechanism of carrier doping at the microscopic level.

The research team recently succeeded for the first time in precisely controlling the transition temperature of superconducting atomic layers using organic molecules. To achieve this, the team fabricated an ideal heterostructure consisting of a superconducting atomic layer and a layer of highly ordered organic molecules on top of the atomic layer. The creation of the heterostructure enabled the team to perform a detailed study on the mechanism behind the doping of atomic layer materials. Consequently, the analysis revealed that the metal atoms at the center of the organic molecules retained electron spins , which could generate magnetism. In addition, the team found that change in superconducting transition temperature is strongly influenced by competition between electron charge and spin in the organic molecules. Moreover, the team discovered that the spin effect is governed by the direction of electron orbitals, which can be viewed as “hidden degrees of freedom” in molecules.

In light of these results, we aim to greatly enhance superconducting properties, i.e. superconducting transition temperature, of these heterostructures . After such enhancement is made, we hope to apply superconducting materials in a wide variety of fields in a manner so that the technology will help ease environmental/energy issues and support the sustainable development of society.

This study was published in Nano Letters, an American Chemical Society journal, on March 30, 2017. 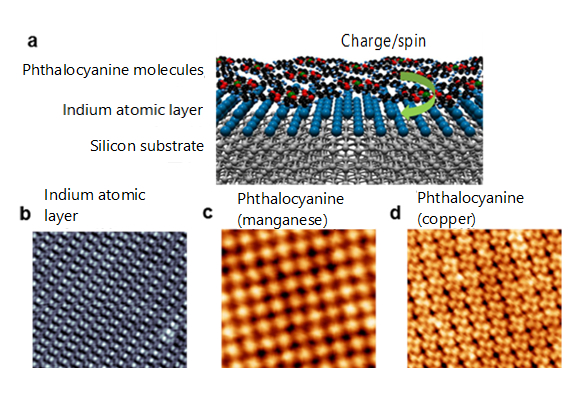 (General questions about this research)

(Regarding the synchrotron radiation facility and Nanotechnology Platform Program)

School of Engineering, University of Tokyo