The group of researchers led by Prof. Kohei Uosaki, a NIMS Fellow at the International Center for Materials Nanoarchitectonics and the Global Research Center for Environment and Energy based on Nanomaterials Science, jointly with another research group led by Prof. Tetsuya Taketsugu at the Faculty of Science, Hokkaido University, advocated a theory that when boron nitride (BN), which is originally an insulating material, is placed on a gold surface, it can function as an electrocatalyst for the oxygen reduction reaction—an important reaction in fuel cells—, and succeeded in demonstrating this theory by experiment.

Hydrogen-oxygen fuel cells are the ultimate clean power-generating device which extract electric power from hydrogen and oxygen with high efficiency and emit only water as waste. However, there are still many challenges to overcome before achieving wide use of this technology. One such challenge is the slow rate of the oxygen reduction reaction at the oxygen electrode, that is, low reaction efficiency. Platinum has been widely used as a catalyst for promoting this reaction. However, as platinum is expensive and limited in quantity and involves stability problems, efforts have been made worldwide toward the development of a new catalyst that can solve said challenge without using platinum or other precious metals. Yet, none of the catalysts that have been developed thus far has reached a satisfactory level. Accordingly, there has been a call for initiatives to develop a completely new type of catalyst, using materials that have never been thought of as catalyst materials.
The present research groups worked together on the development of a precious metal-free catalyst through a combination of theoretical and experimental approaches from the perspective of elements strategy. In their theoretical research, the researchers discovered that when BN, which is originally an insulating material, is placed on a gold surface, its electronic state changes and it becomes conductive, and oxygen molecules are absorbed on BN stably. They further calculated changes in energy at different stages in the oxygen reduction reaction process on the surface and found that BN has the potential to function as an oxygen reduction catalyst. Then, they prepared with various types of BN (e.g. nanosheets, nanotubes) placed on a gold surface, and examined the activity for the oxygen reduction reaction by a rotating disk electrode. They observed a maximum of about 270 mV positive shift for oxygen reduction current to be observed at the gold electrode. On the other hand, No such catalyst activity was observed when a carbon was used as the substrate. Thus, they demonstrated that BN-gold interaction is a key factor for BN to function as an electrocatalyst for the oxygen reduction reaction.
Although the new catalyst is still less reactive than platinum, the researchers succeeded in showing an extremely promising direction in the process of searching for and designing a new catalyst material, through the combination of theoretical calculation and experiments. This approach is expected to lead to the future development of materials for an electrode for fuel cells without using platinum.
This research was conducted as part of the “Elements Strategy Initiative for Industry-Academia-Government Collaboration: Creation of Precious Metal-Free Nano-Hybrid Catalyst” and the “Environmental Technology Development Program with the Use of Nanotechnology,” sponsored by the Ministry of Education, Culture, Sports, Science and Technology. The research results were published in the online version of a US journal, Journal of the American Chemical Society (DOI:10.1021/ja500393g), on April 28, 2014 (local time), and the detailed results of the experiment that used various types of BN were published in the online version of a UK journal, Physical Chemistry Chemical Physics ( DOI:10.1039/C4CP00402G), on May 6, 2014. 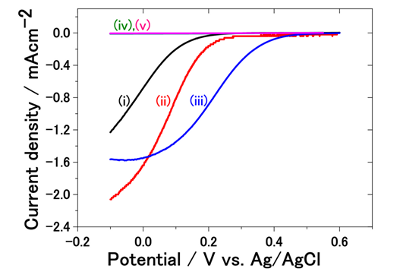