In recent years, it has been found that IGZO film transistors, which are produced from a mixed target obtained by oxidizing indium, gallium, and zinc, operate with high electron field effect mobility. Although process development is underway aiming at development to practical applications, control of oxygen and moisture is extremely difficult with this material. In this research, an IWO (indium-tungsten oxide) thin film that operates as a thin film transistor was developed by adding an extremely small amount of tungsten oxide to indium oxide. The developed material does not contain gallium or zinc, which are elements that are difficult to control in an amorphous state. Because a homogeneous amorphous film can be produced simply by sputter film-forming at low energy, without heating the substrate or similar operations, thin films are easily formed with this new material, and operation as a transistor with high characteristics is possible, even using a structure without a protective film with an unprecedented thin film thickness of 10nm. In addition to avoiding use of expensive gallium, the thin structure is also effective in reducing material costs because the total amount of raw materials used in the thin film can be reduced, and also enables high production efficiency.

These results were obtained through research with the cooperation of the Materials Division of Sumitomo Metal Mining Co., Ltd. 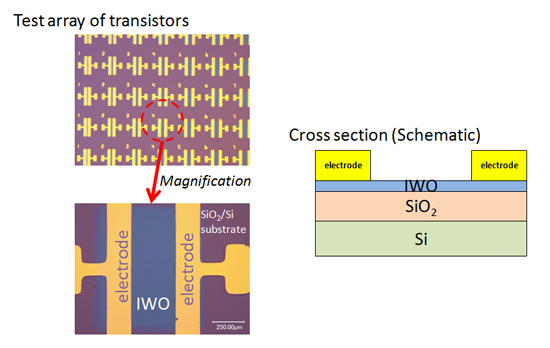