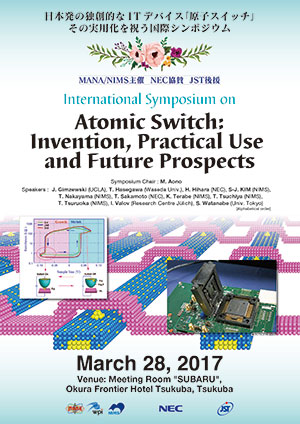 The“atomic switch”, which was invented in 2001 and has been investigated at MANA/NIMS for about 10 years with the support of JST and MEXT and in collaboration with NEC, has come into practical use as the “NEC AtomSW-FPGA”, which will soon be used in robots and space satellites for example. This is because the atomic switch is not only compact and has low power-consumption, but also because it is scarcely influenced by electromagnetic noise and radiation (including cosmic rays).

To celebrate the practical use of the atomic switch, which is a novel nanoelectronics device originating in Japan, we hold a memorial symposium as follows. At the symposium, we will also present information about how the atomic switch has begun to be used for brain-type information processing and for completely novel functional nanodevices. We believe that this symposium will be useful for all the scientists and engineers who are interested in nanoscale devices in relation to AI and IoT. Please participate in this symposium.