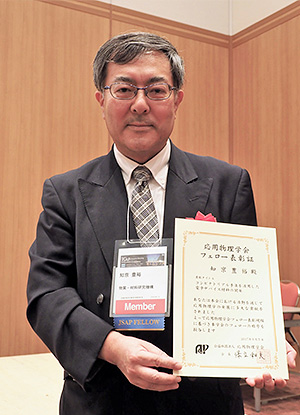 Dr. Toyohiro Chikyow, MANA Principal Investigator has been admitted as a Fellow of the 11th The Japan Society of Applied Physics (JSAP) Fellow (2017). The 11th JSAP Fellow Award Ceremony was held on 5th September 2017, during the 2017 JSAP Autumn Meeting.

The Japan Society of Applied Physics (JSAP) established JSAP Fellow Award in 2006, to honor its members who have contributed greatly to the progress of applied physics through their continuous activities in JSAP. The Fellow Awards were presented to 365 members and 18 JSAP Fellow International by 10th (2016).