NIMS and AIST have developed a small sensor capable of continuously monitoring the plant hormone ethylene. 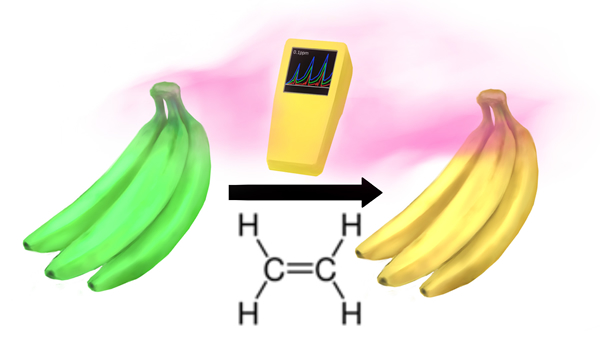 NIMS and AIST have developed a small sensor capable of continuously monitoring the plant hormone ethylene. Ethylene gas promotes ripening in fruits and vegetables, but excessive exposure promotes them to rot. The new small sensor can be used to monitor fruits and vegetables by continuously detecting ethylene gas, ensuring the freshness during transportation and storage, and helping reduce food waste.

Ethylene is a gaseous molecule released by fruits and vegetables as a ripening-promoting phytohormone. Fresh produce can be artificially ripened in postharvest storage by introducing ethylene into a storage facility. Continuous monitoring of ethylene concentrations in these facilities may allow the ripening progression of stored produce to be estimated more accurately, enabling optimal transportation and storage schedule. This potential benefit has led to high demand for the development of small, inexpensive ethylene sensors from the agricultural and food industries. Small sensors capable of detecting ethylene are commercially available, but many of them operate only at high temperatures (200–300 °C). Besides, the commercially available sensors using semiconductors as sensing materials can detect other gaseous molecules (e.g., alcohol and methane) at the same time due to its highly active surface. These existing sensors therefore lack selective sensitivity to ethylene.

In this research project, we developed a small, highly sensitive sensor capable of detecting ethylene with great selectivity. This sensor consists of three components: a highly active catalyst that selectively converts ethylene into acetaldehyde, a reagent that reacts with acetaldehyde to release acidic gas and an SWCNT (single-walled carbon nanotube) electrode which is very sensitive to acidic gas. This highly active catalyst can repeatedly convert ethylene into acetaldehyde as analyte-air passes through it. In addition, the catalyst can operate at near room temperature (40 °C), making the small sensor energy efficient. The acidic gas produced by the reaction between acetaldehyde and the reagent strongly withdraws electrons from the SWCNT semiconductor, changing the semiconductor’s electrical resistance. These characteristics and mechanisms enable the sensor to selectively and sensitively detect ethylene even at an extremely low concentration (0.1 ppm) by monitoring changes in electrical resistance. This sensor is expected to be effective in monitoring ethylene concentrations for many types of fresh produce in storage. For example, the ethylene concentrations that promote ripening in bananas and kiwifruit are approximately 500 ppm and 10 ppm, respectively: well within the sensor’s useful sensitivity range.

This small, energy-efficient, low-cost ethylene sensor is designed to be compatible with big data integration and networking systems, and may therefore serve as a vital tool in putting Japan’s super-smart society vision (the Society 5.0 initiative) into practice in the agricultural and food industries. This research group is designing different types of highly active catalysts to develop small sensors that can detect gaseous molecules other than ethylene.

This project was carried out by a research group led by Shinsuke Ishihara This research was published in the online version of ACS Sensors, a journal of the American Chemical Society, on May 11, 2020, Eastern Standard Time.
For more detail about research