An international joint research team led by NIMS succeeded in fabricating a neuromorphic network composed of numerous metallic nanowires. Using this network, the team was able to generate electrical characteristics similar to those associated with higher order brain functions unique to humans, such as memorization, learning, forgetting, becoming alert and returning to calm. The team then clarified the mechanisms that induced these electrical characteristics.


An international joint research team led by NIMS succeeded in fabricating a neuromorphic network composed of numerous metallic nanowires. Using this network, the team was able to generate electrical characteristics similar to those associated with higher order brain functions unique to humans, such as memorization, learning, forgetting, becoming alert and returning to calm. The team then clarified the mechanisms that induced these electrical characteristics.

The development of artificial intelligence (AI) techniques has been rapidly advancing in recent years and has begun impacting our lives in various ways. Although AI processes information in a manner similar to the human brain, the mechanisms by which human brains operate are still largely unknown. Fundamental brain components, such as neurons and the junctions between them (synapses), have been studied in detail. However, many questions concerning the brain as a collective whole need to be answered. For example, we still do not fully understand how the brain performs such functions as memorization, learning and forgetting, and how the brain becomes alert and returns to calm. In addition, live brains are difficult to manipulate in experimental research. For these reasons, the brain remains a “mysterious organ.” A different approach to brain research—in which materials and systems capable of performing brain-like functions are created and their mechanisms are investigated—may be effective in identifying new applications of brain-like information processing and advancing brain science.

The joint research team recently built a complex brain-like network by integrating numerous silver (Ag) nanowires coated with a polymer (PVP) insulating layer approximately 1 nanometer in thickness. A junction between two nanowires forms a variable resistive element (i.e., a synaptic element) that behaves like a neuronal synapse. This nanowire network, which contains a large number of intricately interacting synaptic elements, forms a “neuromorphic network”. When a voltage was applied to the neuromorphic network, it appeared to “struggle” to find optimal current pathways (i.e., the most electrically efficient pathways). The research team measured the processes of current pathway formation, retention and deactivation while electric current was flowing through the network and found that these processes always fluctuate as they progress, similar to the human brain’s memorization, learning, and forgetting processes. The observed temporal fluctuations also resemble the processes by which the brain becomes alert or returns to calm. Brain-like functions simulated by the neuromorphic network were found to occur as the huge number of synaptic elements in the network collectively work to optimize current transport, in the other words, as a result of self-organized and emerging dynamic processes.

The research team is currently developing a brain-like memory device using the neuromorphic network material. The team intends to design the memory device to operate using fundamentally different principles than those used in current computers. For example, while computers are currently designed to spend as much time and electricity as necessary in pursuit of absolutely optimum solutions, the new memory device is intended to make a quick decision within particular limits even though the solution generated may not be absolutely optimum. The team also hopes that this research will facilitate understanding of the brain’s information processing mechanisms.

This research was published in Scientific Reports, an open access journal, on October 17, 2019. 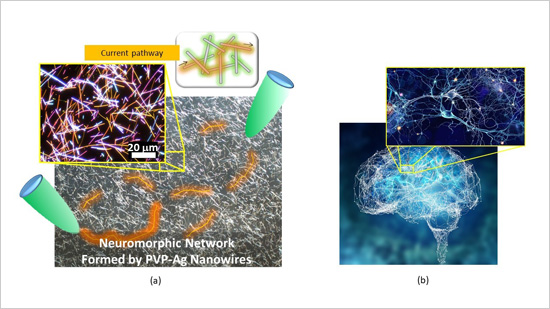 figure: (a) Micrograph of the neuromorphic network fabricated by this research team. The network contains of numerous junctions between nanowires, which operate as synaptic elements. (b) A Human brain and one of its neuronal networks.