NIMS and AIST jointly developed a compact sensor capable of continuously monitoring formaldehyde, a cause of sick building syndrome.

Formaldehyde—which is used as a construction material preservative—is known to cause health problems (sick building syndrome) and is a suspected carcinogen. The World Health Organization recommends that indoor concentrations of formaldehyde not exceed 0.08 ppm (note: 1 ppm = a micro liter volume of a chemical in one liter of air). Continuous monitoring of formaldehyde had been inconvenient due to the need for large, expensive sensors or the necessity of replacing detection tags after each measurement when small sensors are used.

The research group created a small test device capable of continuously monitoring formaldehyde by combining the sensor material with two light-emitting diodes (LEDs) and connecting only one of the LEDs to the material. When the sensor was exposed to formaldehyde, its conductivity increased, which brightened the connected LED. Comparing the relative brightness of the two LEDs enabled detection of formaldehyde at concentrations as low as 0.9 ppm.

The newly developed sensor material can easily be combined with widely used electronic devices, such as smartphones. The fusion of the sensor technology with information and communications technology may enable remote, real-time detection of formaldehyde, thereby making society safer and more secure.

This research project was conducted jointly by a NIMS research group led by Shinsuke Ishihara (Senior Researcher, Frontier Molecules Group, International Center for Materials Nanoarchitectonics) and AIST’s Nanomaterials Research Institute. This study was published in the online edition of ACS Sensors, a journal of the American Chemical Society, on October 16, 2017, local time. 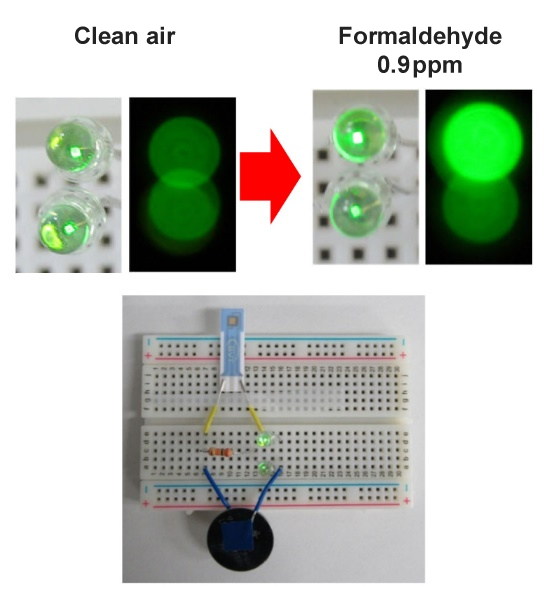