NIMS succeeded in developing a transistor in which an electrical conductance is tuned by an ionic movement induced by a magnetic field, instead of an electric field.

NIMS succeeded in developing a transistor in which an electrical conductance is tuned by an ionic movement induced by a magnetic field, instead of an electric field (Fig. 1). The transistor—which does not require the application of voltage to operate—is potentially applicable to the development of energy-efficient information and communications devices with new functions.

Electrochemical devices capable of converting electrical energy to chemical energy and vice versa are in wide use in the form of batteries, capacitors and sensors, etc. These devices operate on the basis of ion movement within electrolytes. Because ionic transport requires the application of voltage, these devices are unsuitable for use in settings where an electrical power source is inaccessible.

To address this issue, a NIMS research group explored the potential of a magnetic ionic liquid, 1-butyl-3-methylimidazolium tetrachloroferrate. This liquid has been studied in the past, but previous research focused only on its “liquid magnet” properties. No study had focused on the charge of ions. A NIMS research group fabricated an electric double layer transistor using the magnetic ionic liquid as an electrolyte, based on the assumption that the liquid allows charge transport with a magnetic field (Figure). The team confirmed that the application of a magnetic field to the transistor induced movement in the magnetic ions within the electrolyte, thereby changing the resistance between the electrodes. Thus, the transistor operated successfully simply by applying a magnetic field.

In this study, they used an electromagnet as a magnetic field source. If a permanent magnet can be used instead, the technology may be applicable to the development of energy-efficient information and communications devices. Thus, they will pursue this research direction. In addition, they plan to research other electrochemical devices, such as batteries and capacitors, in which an ion transport is usually controlled by an electric field.

This study was published in the online version of Scientific Reports, issued by the Nature Publishing Group, on September 5, 2017, Japan Time. 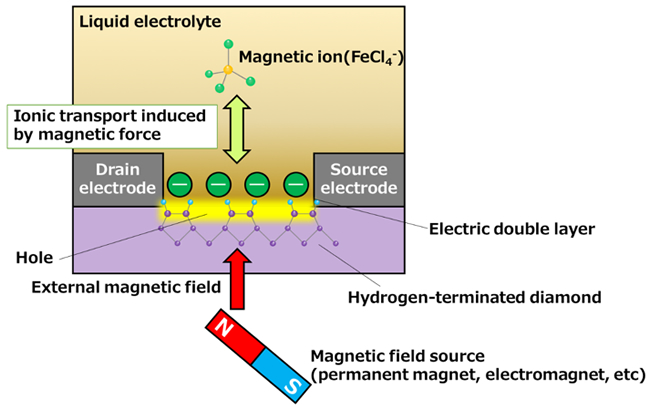 Figure: Application of an external magnetic field to the transistor induces movement in the magnetic ions (ferric chloride ions) within the electrolyte, thereby controlling the electrical resistance of the diamond.