Precision Control of the Timing, Structure and Functions in Molecular Self-Assembly

A research group led by Dr. Takashi Nakanishi, MANA Independent Scientist, and Dr. Martin J. Hollamby, ICYS Researcher (currently a lecturer at Keele University in the United Kingdom), at the National Institute for Materials Science (NIMS; President: Sukekatsu Ushioda), as part of an international joint research project with researchers of Osaka University, the National Institute of Advanced Industrial Science and Technology (AIST), the Warsaw University of Technology in Poland, the Eindhoven University of Technology in the Netherlands, the Institut Laue–Langevin in France, the University of Bristol in the United Kingdom, and the Max Planck Institute of Colloids and Interfaces in Germany, developed a new technology that can easily and precisely control the timing of and the structure as well as functions obtained in self-assembly of π-conjugated molecules, which is a key technology in the field of organic electronics materials. The control is possible only by adding a segment of the alkylated π-conjugated molecules to be self-assembled.

In the development of organic electronics materials, self-assembly, a phenomenon whereby molecules spontaneously arrange themselves in an organized manner, is an essential process. However, it is difficult to precisely control the appropriate molecular arrangement and the finally obtained structure in the self-assembly of π-conjugated molecules, which are major molecular contents for organic electronics, due to their strong aggregation tendency. Also, no facile and useful method had been developed to control the timing of the self-assembly either. In this research, the group overcame these problems, and found a novel concept of molecular design and self-assembly methodology that can be generally applied to various π-conjugated molecules.
Branched alkyl chains attached on a fullerene (C60) is employed in this research as a representative alkylated π-conjugated molecule. It appeared as if the hydrophilic portion of a surfactant (soap molecule) were replaced with C60. This molecule was a liquid state at room temperature, but when adding to it its own component (part) C60, it self-assembled to form a multi-layered lamellar (sheet) structure. When addition of the other part of the molecule, the alkyl chain, was made, it formed a globular micelle or a fibrous gel structure. In other words, by merely adding different parts of this molecule, it was possible to control the timing of the self-assembly and also precisely control the obtained structure. This phenomenon has been confirmed with alkylated molecules whose π-conjugated part is not C60, so the proposed method can be considered as a new self-assembly technique that can be applied to various π-conjugated molecules in general.
If π-conjugated molecules to be used for self-assembly are kept as a liquid at room temperature, they can be directly coated onto various shapes and geometries of substrate surfaces in advance. Then, by adding a molecular segment at a desired timing, self-assembly can be performed on the spot. Since the assembled multi-layered lamellar sheet structure or gel fiber structure exhibits C60-derived photoconductivity, the desired type of structure can be selected according to use. The results of this research are expected to be widely applied as a new self-assembly technique that enables production of organic electronic devices suited to the purpose of use.
This research was carried out as part of the "Studying the function of soft molecular systems by the concerted use of theory and experiment" project (Project Leader: Tahei Tahara, RIKEN) under Grant-in-Aid for Scientific Research on Innovative Areas, and will be published in the online version of the U.K. science journal, Nature Chemistry, (DOI: 10.1038/nchem.1977) on June 23, 2014, at 2:00 JST (on June 22, 2014, at 18:00 local time). 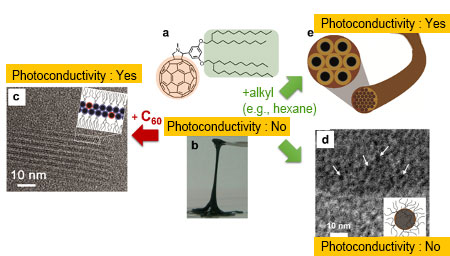 Typical examples of self-assembly and photoconductivity control of liquid alkyl-π-conjugated molecules. (a) Chemical structure of the alkyl-C60 molecule used in this research. (b) Photograph of the alkyl-C60 molecule (solvent-free condition; liquid at room temperature). (c) High-resolution TEM image (the dark spots in the image show the individual arranged C60 parts) and a schematic illustration of a multi-layered lamellar sheet structure after adding C60. (d) Cryogenic high-resolution TEM image and a schematic drawing of a micelle structure after adding n-decane solvent as an alkyl component. (e) Schematic illustration of a gel fiber structure obtained by adding n-hexane solvent (rod-like micelles assembled hexagonally, and bundled to form a fiber gel. Black circles: cross-sections of C60 nanowires.).