FON’14 (The 2nd International Symposium on the Functionality of Organized Nanostructures) was held at the National Museum of Emerging Science and Innovation (Miraikan) in Odaiba, Tokyo from November 26 (Wednesday) to 28 (Friday), 2014. The aims of the event were to look back on the development of nanotechnology over the past 10 years since the first symposium, FON’04 in 2004, and to discuss the future development of nanotechnology. This year’s symposium also commemorated another important milestone in the 25th Anniversary of the start of the “Aono Atomcraft Project,” which was carried out from 1989 to 1994 as an ERATO Project of the Research Development Corporation of Japan (JRDC; now Japan Science and Technology Agency (JST)), and was held to mourn the loss of Dr. Heinrich Rohrer, who passed away in 2013. Dr. Rohrer was a recipient of the Nobel Prize in Physics in 1986, and also made many valuable contributions to NIMS.

FON’14 began with an opening speech by the Chief Executive Director of Miraikan, Dr. Mamoru Mohri. The symposium featured 24 invited lectures by world’s top level scientists and young researchers who have produced remarkable achievements from both Japan and other countries, as well as 78 poster presentations. A special session was also held to remember Dr. Rohrer’s passion for science. A total of 217 persons attended during the 3-day period. FON’14 Poster Prizes were selected based on scores given by the invited speakers, and six young researchers and students were honored at the Closing Ceremony. 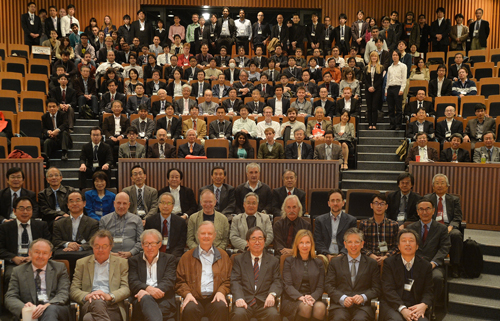