- What are our future challenges? - 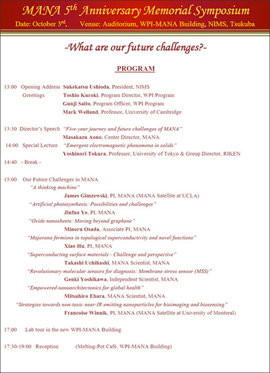 MANA will hold a symposium entitled "MANA 5th Anniversary Memorial Symposiumon" on October 3, 2012, in commemoration of the foundation 5th anniversary of MANA.

MANA was founded in October 2007 with the support of the World Premier International Research Center Initiative (WPI Program) of Japan’s Ministry of Education, Culture, Sports, Science and Technology (MEXT). The WPI program aims “to build globally visible research centers that boast a very high research standard and outstanding research environment, sufficiently attractive to prompt frontline researchers from around the world to want to work in them.” MANA has made considerable progress toward achieving this aim during the first five-year period of the WPI Program (2007-2011). This is made clear by the high praise MANA received in the WPI Program Committee’s interim evaluation.

However, we, the scientists of MANA, are not satisfied with this accomplishment. We want to tackle even more challenging research during the next five years. Thus, as the WPI Program enters its second half, we take this opportunity to open MANA’s 5th Anniversary Memorial Symposium for discussion on the “future challenges of MANA.”

The symposium is completely open to the public. We sincerely hope that many of you will join us.