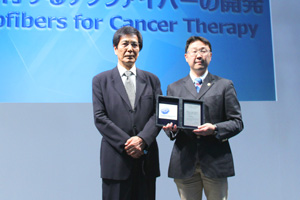 The “nano tech International Nanotechnology Exhibition & Conference” is the world's largest nanotechnology fair and is also an essential event for state-of the-art manufacturing. “nano tech 2014” was held at Odaiba, Tokyo, on January 29-31. NIMS participated in the exhibition along with approximately 600 other institutions, including companies and universities.