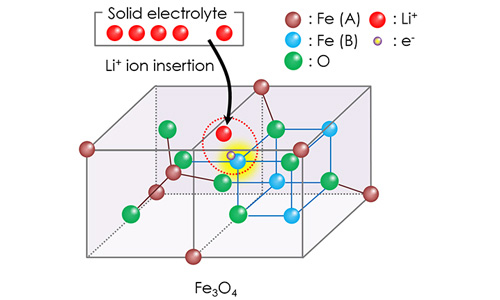 Figure: Schematic showing the chemical basis for a novel redox device that has been made by WPI-MANA researchers. The electrical and magnetic properties of the device can be adjusted and reversed by adding or removing lithium ions (LI+) from a layer of magnetite (Fe3O4).

The ever-increasing amounts of electronic data that we generate in our personal and professional lives require new storage technologies that can fit lots of data into small physical spaces. The most promising solutions include solid-state redox devices, which work by controlling the magnetic properties of materials. By carefully adjusting the chemical composition of ferromagnetic thin films, researchers succeeded in tuning reversible magnetic properties, which can be applied to next-generation high density data storage enabling low power consumption.
Now, Tsuchiya, Terabe, and Aono at the International Center for Materials Nanoarchitectonics, NIMS and co-workers have developed a new solid-state device in which several magnetic and electrical properties can be changed and reversed by inserting and removing ions. The team believes that their device could pave the way for spintronics — novel devices that exploit not only the charges on electrons but also the intrinsic angular momentum, or spin, that is predicted by quantum mechanics.
The new device contains a thin film made from the iron oxide magnetite (Fe3O4) next to a layer of lithium silicate. Magnetite holds particular interest for spintronics, because it is predicted to be a half-metal, meaning that it conducts only electrons of one particular spin state. When the researchers apply voltages across certain parts of their device, they can insert or remove lithium ions into the magnetite, thereby changing the electrical conductivity, magnetization, and magnetoresistance (the dependence of electrical resistance on an external magnetic field) of the thin film.