A so-called bioparallel chemistry approach is successfully used to image and activate an essential metabolism compound inside a cell. 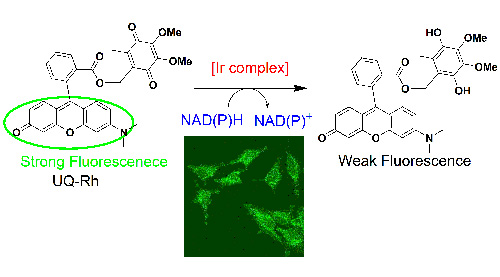 Reduction of ubiquinone-rhodol by NADPH/NADH.
A system of compounds has been developed that can signal the presence of certain chemical compounds critical to cellular energy metabolism, as well as activating them. The work demonstrates an approach that the authors suggest could be used to control or investigate cells. They describe their approach as ‘bioparallel chemistry’, emphasising the contrast with widely known bioorthogonal chemical reactions that do not interfere with biological processes native to the cell.
The researchers, a collaboration of researchers at Keio University and the International Centre for Materials Nanoarchitectonics at the National Institute for Materials Science, imaged nicotinamide adenine dinucleotide derivatives – NADH and NADPH. The phosphorylated form, NADPH, is used in photosynthesis and NADH has been identified as a potential treatment for Alzheimer’s and Parkinson’s diseases. The fluorescent compound developed to image NADH and NADPH was a molecule combining ubiquinone – an aromatic compound that has been shown to react NADH and NADPH in vitro – and the fluorophore rhodol.
The researchers incubated ubiquinone-rhodol with HeLa cells. When the metabolic process that generates NADH was triggered in the cells the fluorescence was found to decrease as the ubiquinone-rhodol was reduced, indicating that NADH increases in cells can be monitored with ubiquinone-rhodol.
Similarly the fluorescence decreased when an artificial iridium based ‘promoter’ complex was injected into the cell, followed by leaching of the cell contents and ultimately death of the cell. The researchers suggest the damage to the cell subsequent to the injection of the artificial promoter was the result of NADH/NADPH activation upsetting the cell’s homeostasis.
“It may be possible to use this strategy to control cellular systems or living systems in general,” suggest the researchers in their conclusion. “This system could form the basis of a new approach in medicine, with the development of novel artificial promoters and reagents.”