'Micrometre-level naked-eye detection' of caesium ions, a major source of contamination in the vicinity of radioactive leaks, is demonstrated in a material developed by researchers in Japan. 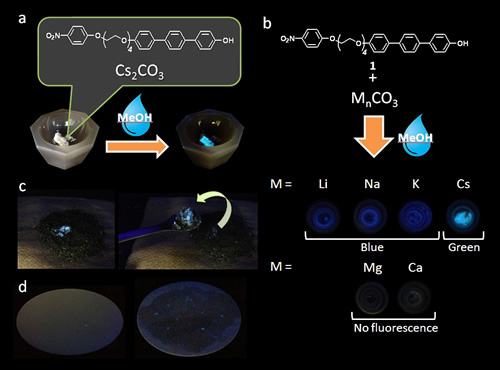 Radioactive caesium 137 has a half-life of 30.17 years, and its accumulation in organisms in exposed regions, such as around the Fukushima Daiichi nuclear plant, amplifies the hazard it poses. A new material reported by researchers in Japan may help. "We have developed molecular materials as an optical probe for caesium cation-containing particles with implementation based on simple spray-on reagents and a commonly available fluorescent lamp for naked-eye detection in the solid state," explain Jonathan P Hill, Katsuhiko Ariga and colleagues at the WPI-International Center for Materials Nanoarchitectonics, Tokyo University and the Japan Science and Technology Agency (JST).
The researchers based the probe on changes in the fluorescence of organic compounds called phenols in the presence of alkali metals. They designed a substituted phenol compound with an electron-accepting 4-nitrophenyl ether (4-NPE) group. The compound showed a distinctive green fluorescence in the presence of caesium cations and methanol. In comparison, other alkali metals gave rise to dimmer blue fluorescence.
The researchers noted that the fluorescence peak shifted with increasing caesium concentration so that the probe could be calibrated. The probe was sensitive to caesium concentrations of 1 part per million. This is the concentration naturally occurring in the Earth's crust meaning excess to the norm can be detected.
Alongside molecular dynamics calculations these observations suggested the mechanism behind the fluorescent behaviour, for which the geometry of the compound molecules and interactions between different constituents seem key.
As the authors suggest, "The availability of this and other similarly easily implemented tests for environmental contaminants is likely to increase the volume of data regarding rates of contamination around chemical and radiological hazards."