New Approach for The Synthesis of Carbon Nanosheets

Carbon nanosheets — thin materials consisting of only carbon — have many useful properties, including energy-storage and catalytic functionality. The large-scale production of carbon nanosheets, however, has been challenging. 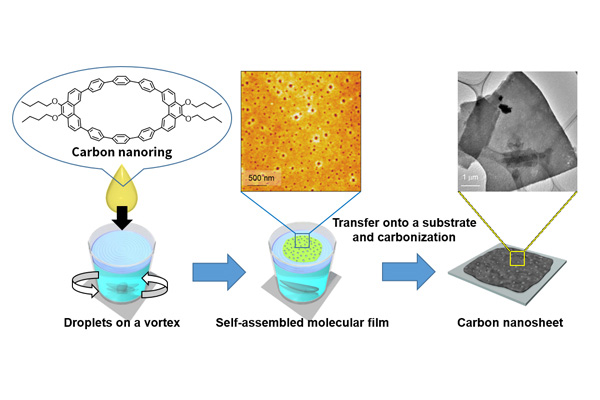 Figure: Synthesis of carbon nanosheets from CPPhen molecules.
Now, Taizo Mori and Katsuhiko Ariga at WPI-MANA, NIMS, Tsukuba, Japan, and colleagues have discovered a relatively simple method for the fabrication of large carbon nanosheets.
The researchers started from a solution of specially designed organic molecules, CPPhen (cyclopenta phenanthrene) provided by Kenichiro Itami at the Nagoya University, in chloroform. CPPhen molecules have an ellipsoidal shape and consist of several hexagonal benzene rings — typical precursors for graphitic (i.e., layered carbon) networks. The solution was put dropwise onto an air–water interface undergoing vortex flow (the type of motion observed when stirring a liquid in a glass). The centrifugal rotation helped to spread the CPPhen molecules uniformly on the air–water interface. After stopping stirring, the chloroform was left to evaporate, and the resulting self-assembled thin film was put on a substrate. The final step was to ‘carbonize’ the on-substrate film by heating and exposure to nitrogen gas flow.
Importantly, the produced film, having a thickness of about 10 nanometer, indeed showed uniform two-dimensional morphology. Mori and colleagues also noted that the sheets were highly porous — pore sizes were about 20 to 30 nanometer.
The researchers attribute the success of their approach to the role of the intermolecular interactions between the CPPhen molecules; applying the same procedure to molecules containing elements of the CPPhen structure did not lead to the formation of planar carbon sheets.
The scientists also explored the synthesis of nitrogen-doped carbon sheets with their carbonization method. Mixing CPPhen with pyridine, a nitrogen-containing compound, before dripping it onto the vortex air–water interface, resulted in sheets with high nitrogen content — Mori and colleagues assume the pyridine molecules were trapped within the CPPhen molecules or between them during carbonization. The electrical conductivity of the nitrogen-doped carbon sheets was significantly higher than that of the undoped ones, which is promising for applications. Indeed, the scientists conclude that this “would allow the utilization of nitrogen-doped carbon nanosheets as highly efficient catalysts for oxygen-reduction reactions for high-performance fuel cells.”