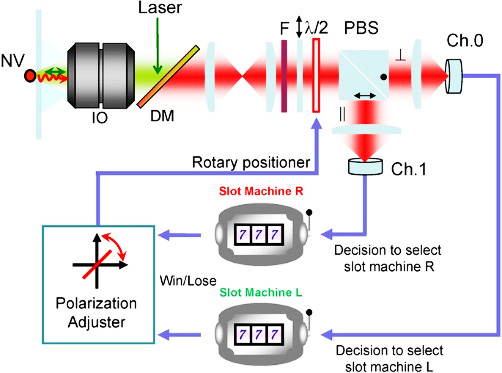 Difficulty in decision-making to gain the maximal reward in uncertain, dynamically changing environments has been known as "multi-armed bandit problem (MAB)" in machine learning. In this type of problem, the fundamental difficulty consists of a trade-off between "exploration cost for new best" and "exploitation of known best".
To tackle the problem, Song-Ju Kim at the International Center for Materials Nanoarchitectonics, National Institute for Materials Science, Makoto Naruse at the National Institute of Information and Communications Technology, Serge Huant at the Institut NEEL, CNRS, and collaborators experimentally demonstrated that a single photon can be utilized to realize an autonomous physical decision-making machine. They successfully applied a theory of a decision maker based on the “tug-of-war (TOW) algorithm”, which was proposed by Song-Ju Kim and his colleagues, to artificially constructed decision-making machines by exploiting the particle and probabilistic nature of a single photon.
In their experimental architecture, the TOW mechanism is implemented with the notion of a polarization adjuster. As shown in the figure, a single photon emitted from a nitrogen-vacancy (NV) center in a diamond passes through a polarizer and then through a half-wave plate mounted on a rotary positioner, and impinges on the polarizing beam splitter (PBS). The two detectors (Ch0 and Ch1) are avalanche photodiodes (APDs). The detected signal is sent to a time-correlated single-photon-counting system where individual events are directly captured. The system associates the detection of a photon in Ch0 or Ch1 immediately with the decision to select slot machine R or L, respectively. Then the system adjusts the polarization of the photon by changing the angle of rotation of the half-wave plate based on the decision.
The study proposes a system to achieve an autonomous intelligent machine based on a purely physical mechanism, which is completely different from existing machine learning systems executed with software in a computer. This development of new solutions to MAB is highly expected to contribute to the creation of new information and communications technology (ICT).