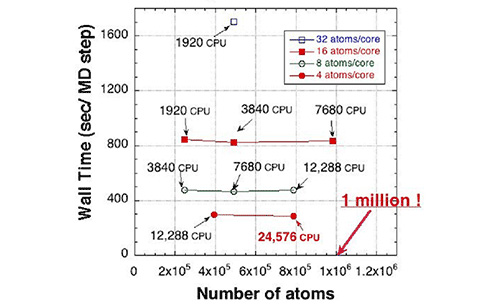 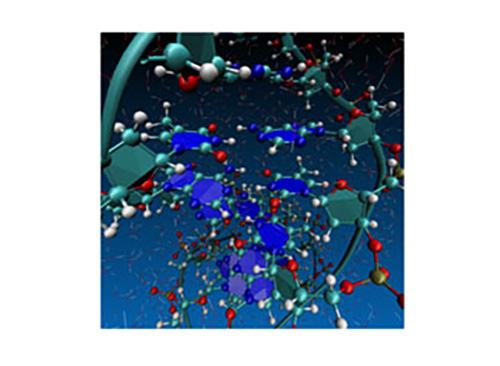 Matter is composed of atoms, and its physical properties are determined by the complex interactions between atoms and electrons. Theoreticians use quantum mechanics to calculate the forces between atoms, and the behaviour of electrons in materials. Specifically, first-principles simulations are based on quantum mechanics, and are a powerful technique widely used to elucidate diverse properties of matter and materials at the atomic scale.
However, the size of the systems modelled with conventional first-principles methods is limited to only a few hundred atoms (in most cases) because the complexity and time required for simulations increases as the cube of the number of atoms being modelled.
Now, a research team led by David Bowler, NIMS MANA and UCL London Centre for Nanotechnology, and Tsuyoshi Miyazaki at NIMS, has successfully developed a highly efficient, large-scale first-principles simulation method for simulating the dynamics of very large systems, containing 100-1,000 times more atoms than conventional methods (up to millions of atoms).
This method provides the means of performing atomic and electronic structure simulations of biological molecules and complex matter, including nanostructured materials, for which conventional methods cannot be used.
The research team has been pursuing the development of a calculation method capable of performing highly efficient large-scale simulations of dynamics. Here, by introducing a new technique where the time required increases linearly with the number of atoms and utilizing supercomputers, namely the “K computer” and FX10 installed at RIKEN and the University of Tokyo, respectively, the team successfully performed first-principles dynamical simulations of systems comprising more than 30,000 atoms, which is 100 times larger than is usual with conventional methods. Their success will pave the way for simulation of very large systems including up to millions of atoms.